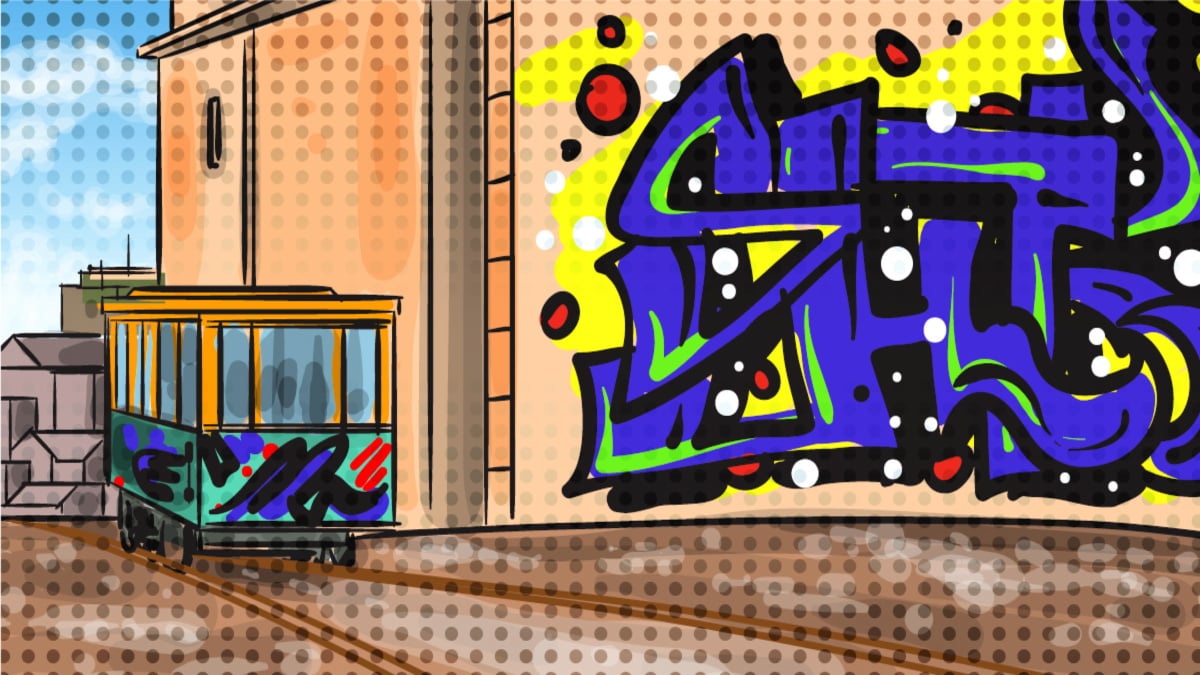 Lisbon is a city with tons of interesting things to pick from when creating a travel itinerary.

In fact, it has so much to see that it would be impossible to explore it all in just one trip.

Trust me, I know because I tried squeezing in a million things when my now ex and I planned our first visit last year.

Spoiler alert, we only got to about half of what I had on my Lisbon bucket list—which isn’t the end of the world because now I’ve got a reason to plan another longer visit later this year.

Every time I’m making a travel itinerary for a new city, I always end up thinking I’ll accomplish way more than I end up seeing.

While making my to-do list, I like to choose a mix of the most popular spots, with a few more unique things to do mixed in, because it’s fun to go to spots most tourists miss out on.

This list of unusual things to do in Lisbon includes spots from my original to-do list from my last trip, plus some local recommendations from my friend Dora, who told me all about her favorite hidden gems in Lisbon to show visitors.

1. Stroll Around the Oldest Book Store in Lisbon

Did you know the oldest operating bookstore in the world is in Lisbon?

Head to Livraria Bertrand, in Chiado, to discover the mecca of bibliophiles.

This place has had a few different owners over the years, but has always been selling books.

At one point, they even had their own printing press to produce books for a bit in the late 1880s.

Once you’ve found the perfect reading material, grab a coffee at their cafe and curl up with your new purchase.

This old candle shop has been in business since 1789, making it one of the oldest candle shops in the world.

It’s even been in the same family for over seven generations!

Fair warning, if you buy a candle, put it in your checked luggage, otherwise you’ll likely get chosen for additional screening, which happens to me every time I toss a candle in my carry-on luggage.

3. Hit Up a Secret Concert

One of my favorite things to do while I’m visiting big cities is to check if Sofar Sounds has any of their legendary secret concerts available.

I haven’t gone to one in Lisbon yet, but I went to one in New York City last year and had a ball.

Basically, you buy a ticket to a show only knowing what neighborhood it’s in.

Then the day before the show you’ll get an email letting you know the secret location.

When you show up, you’ll see a one of a kind show in a stunning location with up and coming local artists. Discover Concerts
If you click this link and make a purchase, I earn a commission at no additional cost to you.

4. Have a Drink at Pavilhão Chinês

My local friend Dora took my ex and I here for drinks one night and we all agreed this has to be one of the coolest bars in Lisbon.

Pavilhão Chinês almost feels like a funky museum with an insane amount of quirky antiques around every corner.

Each room has a bit of a theme. We drank in their military room, which had lots of figurines, model airplanes, and old gear all over.

The drinks here are solid though their cocktail menu isn’t huge.

This is the perfect spot to relax after a day of sightseeing, especially if you want a unique spot to take photos.

5. Wander Around the National Coach Museum

The National Coach Museum is home to tons of gorgeous old horse carriages, plus some really cool old cars.

In fact, Museu Nacional dos Coches has the most valuable collection of 17th, 18th, and 19th century vehicles in the world.

The best part is this museum is free to check out!

Of course, the only downside is you’ll be dying for a ride in one of these fancy carriages, which isn’t allowed. 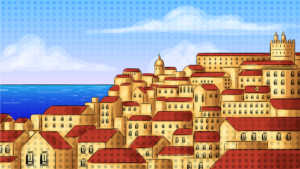 14 Fabulous Free Things to Do in Lisbon: Ideas You’ll Love

Traveling on a budget? Check out this list of free things to do in Lisbon to save time and money on your next trip!

Portugal has a ton of gardens to choose from, so what’s so special about Bordallo Pinheiro Garden?

Since it’s part of the Museum of Lisbon, this little piece of greenery has an artistic edge, with giant porcelain creations lurking around every corner.

I’m pretty sure you’ll never find another garden in the world that’s as quirky.

Recently, I got into a habit of trying to hop on at least one food tour per visit to each city that I hit up.

I’m very partial to the ones that Devour Food Tours offers, since they also involve trying local food I may not be brave enough to try solo.

Though I haven’t had time to check out their Lisbon tour, I have been on their NYC and Florence food tours.

Both of which left me with not only a very full stomach, since we hit up all the best foodie spots, but also tons of local knowledge about the area.

I seriously cannot recommend them enough! I was shocked by how many hidden gems I was introduced to while on Devour Tour's food tour. I can't recommend this enough for tourists and even locals!

8. Soak in the View at Miradouro Panorâmico de Monsanto

Besides having one of the best views in Lisbon, this now abandoned 1960s restaurant is home to some of the coolest under the radar graffiti artwork in Lisbon.

Since Miradouro Panorâmico de Monsanto is a public viewpoint, it’s free to enter and the perfect spot to admire the skyline of the city below.

9. Spot the Rhinoceros of Belém Tower

While you’re checking out Lisbon’s famous Belém Tower, take a minute to spot the rhinos at the base of one of its turrets.

The stone carvers set out to immortalize a famous rhino that was sent from India in 1515.

Since it was the first rhino to set foot in Lisbon since Roman times, everyone went crazy over it.

They kept the rhino on display at King Manuel I’s Ribeira Palace until he grew sick of it and sent it to Pope Leo X as a gift.

Unfortunately, the rhino ended up drowning off the coast of Italy.

Get your ticket today! 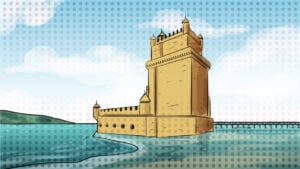 11 Terrific Things to Do in Belém, Lisbon

When in Lisbon, you need to try the tarts at Pastéis de Belém, then afterwards, check out some of the places on this list of the best things to do in Belém!

10. Catch a Film at The Museum of Cinematography

Anyone who loves movies needs to check out Cinemateca Portuguesa.

You’ll learn all about the evolution of Portuguese cinema while checking out an impressive permanent collection and some really interesting special exhibits.

I haven’t been here yet, but I’ve been told that they also have a great gift shop and restaurant if you want to make a full afternoon out of your visit.

Keep an eye on their schedule for upcoming special screenings, film festivals, and special exhibits.

11. Check Out Art in Marvila

Head east to Lisbon’s Marvila neighborhood to check out one of the best to stroll around checking out art.

This area has a ton of street graffiti thanks to the MURO Art Festival, which was held there in 2017.

The murals of Marvila are seriously cool. In fact, next time I’m in town, I really want to head here to do a photoshoot in front of one of them.

Fair warning, there’s not much in this neighborhood besides the street art and lots of apartment buildings.

Join an art tour to make sure you don’t miss any of Lisbon’s amazing graffiti!

Want to learn a bit about electricity while you’re exploring Lisbon?

Head inside an old 1950s power plant to the Electricity Museum.

Here you’ll see how electric power production began, including learning all about the scientists behind the evolution.

There are also interactive exhibits, and the opportunity to check out all the old machinery that gave Lisbon its power during the plant’s heyday.

13. Browse One of the Smallest Book Shops in the World

Livraria Simão has to be one of the cutest book shops that I’ve ever seen.

This place is so tiny that literally only one person at a time can fit inside.

Impressively, it’s got a solid number of books, most of which are secondhand.

Though most books are in Portuguese, you’ll also find a selection of English and Spanish options.

Okay, so while this isn’t a place I’m dying to go, it’s also got to be the most unusual thing to do in Lisbon.

This place has been rehabbing old dolls since the 1830s, and now even has a teddy bear and Barbie repair as well.

If you’ve got a toy from childhood that you want to refresh, this is the place to bring it.

Architecture lovers won’t want to miss out on seeing Lisbon’s “House of Spikes”.

This 16th-century palace was home to the Portuguese viceroy of India, and most impressively was one of the few buildings to survive the 1755 earthquake.

Casa dos Bicos is another spot that I didn’t have time to see on my last visit, but you better bet it’s on my to-do list for when I’m in Lisbon again later this year.

16. Explore the Museum of Puppetry

The Museum of Puppetry is the first and only museum for the art of puppetry in Portugal.

You’ll learn all about the different puppets and marionettes, as well as the history of the theatrical traditions, and modern techniques of puppetry.

They also have fun little areas where you can play with the puppets, because let’s be honest, you know you want to!

I hope this article has given you plenty of ideas for unusual things to do in Lisbon.

Let me know in the comments below what you’re most looking forward to checking out on your next trip! 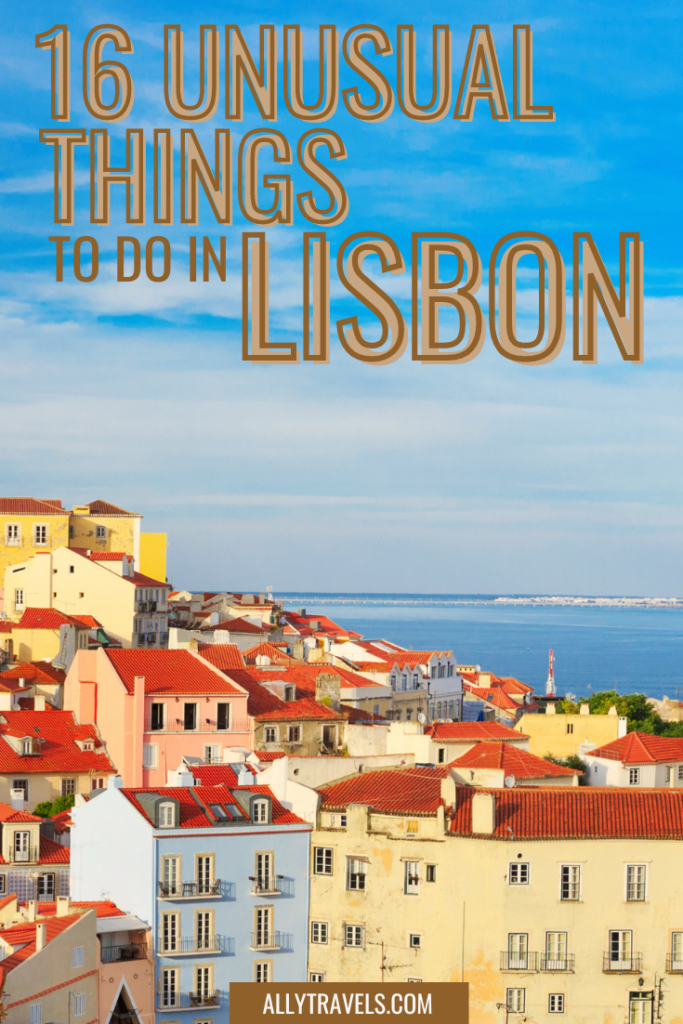