30 Movies Set in Italy: Movies About Italy You Need to See 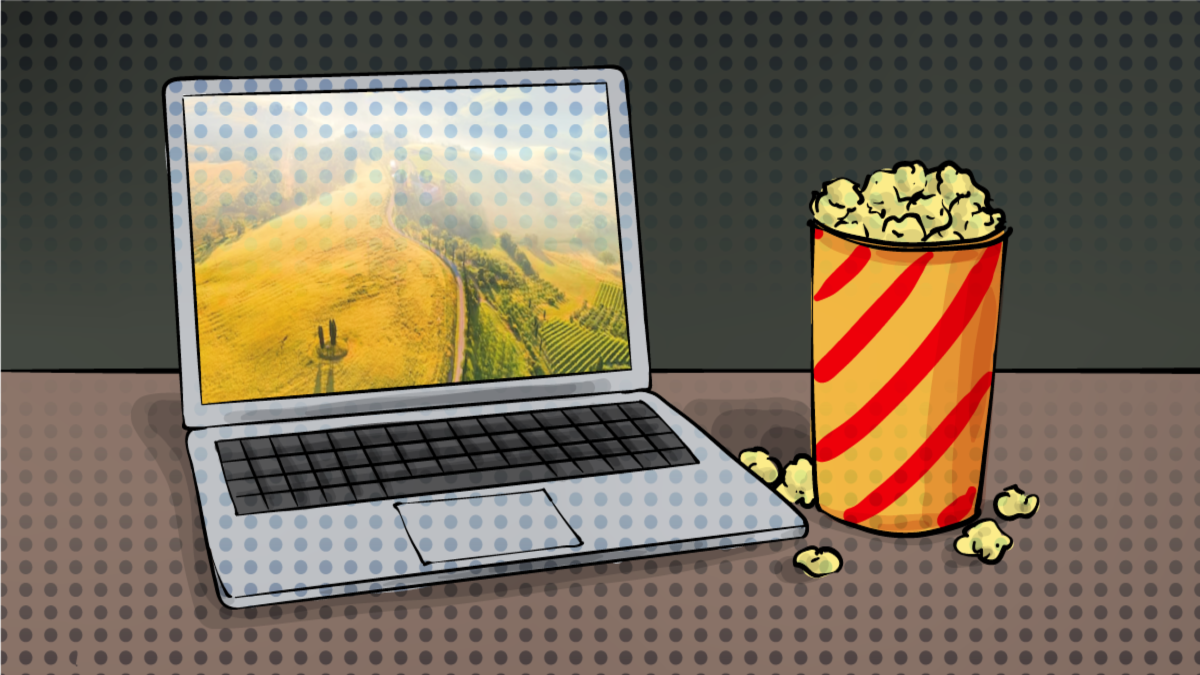 One of my favorite things about the movies is that it lets us travel without having to leave the house or the theater.

It’s the ultimate place to get travel inspiration!

Between seeing When in Rome and The Lizzie McGuire Movie, both films about Italy, I knew Rome was a place I needed to explore.

I imagined finding romance like them, along with adventures on vespas, and amazing food.

Spoiler alert, I didn’t find romance or a scooter ride in Rome, but I made a lifelong friend, and found the best hidden pasta place in all of Roma!

Scroll on to find all the best movies about Italy to inspire your next Italian adventure!

Okay, one of the main reasons Rome was on my travel bucket list was because of this movie.

It follows high school student Lizzie, on her school trip to Rome. Obviously, she finds adventure the second she arrives.

Fair warning, If you didn’t grow up watching Lizzie McGuire, you might be a bit confused because the film was the grand finale of the Disney franchise.

Nobody enjoys having to go to their sister’s wedding alone, but when the wedding is in Rome, you can trust that the romance will flow.

This rom-com is cute, easy watching, plus Kristen Bell is super charming and funny!

This film follows an imagined interaction between Pope Francis and Pope Benedict XVI.

I haven’t seen it yet, but friends tell me the acting is incredible and that it’s an interesting insight into the Vatican.

I know not everyone likes movies with subtitles, but this movie is so worth giving them a try.

It follows an aging writer who looks back on his life of lavish parties and beautiful women.

The second I saw this movie, visiting the Juliet Club in Verona, was at the top of my Italian wishlist.

This is a great rom-com with picturesque views, and a cute storyline. Perfect for date night.

I just saw this for the first time this week, and it’s fantastic. I can’t believe I hadn’t heard of this before I started researching for this post.

It’s got a great cast, beautiful scenery, and classic 90s rom-com vibes. Watch it with a nice bottle of wine for your next girls’ night.

This is one of my all-time favorite travel movies. If you haven’t seen it, do yourself a favor and watch it now.

Have an enormous glass of Chianti, a cheeseboard, and settle in because this movie will make you think buying a villa in Tuscany is a great idea.

Head back to summer in Italy in the 1980s with Call Me By Your Name.

This is a gorgeous film, with fantastic acting, stunning views of Italy, and beautiful story and direction—basically all you need to now is that they won a ton of awards when it came out.

Seriously, this Julia Roberts classic is a must-watch for the part where she spends three months living in Rome.

The food in the film is absolutely mouth-watering and, well, Julia is naturally charming.

Plus, it’s also based on a true story, which is always cool.

If you enjoy Woody Allen films, To Rome With Love will be right up your alley.

The film follows four different storylines as the magic of Rome takes over.

This historical drama is hailed by fans as a total masterpiece.

It’s got a bunch of fighting, ancient Roman history, and fantastic acting, this should be an easy watch!

Did you know Shakespeare’s Much Ado About Nothing is set in Messina, a small town outside of Sicily?

This is a classic tale, with marvelous acting by Emma Thompson. It’s great for movie night.

This is another one I just discovered while researching for this list, and it was such a fun watch.

It’d be great for a date night, or even just chilling solo with wine.

This film follows a young man in 1980s Naples as he comes to terms with family, tragedy, art, and joy.

This one isn’t out yet, but looks really promising.

This Mary-Kate and Ashley classic is the perfect throwback for movie night.

The James Bond franchise is famous for its stunning settings, so it only makes sense they’d film part of it in Lake Como.

Everyone loves a James Bond film, especially one with scenes set in Italy.

This one opens in Lake Como where Casino Royale ends.

Besides a ton of gorgeous Italian scenery, you can expect one of the best installments to date (in my opinion).

I only saw this film for the first time a few years ago on a plane, and all I wanted to do after seeing it was to get on a plane to the coast of Italy.

This is a great pick for date night, or to watch with a group of friends.

I guarantee any movie by Disney, and Pixar will be a brilliant choice for movie night.

Luca is a super adorable tale of a young merman as he finds adventure in a charming coastal town, based on Cinque Terre.

This was another brilliant discovery while researching for this list.

I haven’t watched it yet, but it came highly recommended by a friend whose taste I trust.

The preview alone sold me on this one!

If you want a heist movie with lots of speeding cars, big name actors, and gorgeous scenery, The Italian Job is the movie for you.

Both versions are classics. Watch the trailers to decide which one you’ll prefer.

This was the first of the Tom Holland Spiderman films I saw, and he instantly became my favorite Spiderman.

This movie also made me so excited to plan a trip to Venice one day.

This romantic thriller may have not been at the top of critics’ picks, but it garnered a few Golden Globe nominations.

Either way, Venice absolutely steals the spotlight from Angelina Jolie and Johnny Depp in this film.

I’m ashamed to admit that I haven’t actually seen The Godfather.

I know it’s a major classic, and I need to see it, and will one day.

If you haven’t already, cross this cult classic off your to-do list!

This is one of my all-time favorite classic films.

If you love Audrey Hepburn and haven’t seen this yet, you need to download it ASAP!

You’ll fall in love with Rome and the classic cinema watching this old gem.

This Cannes Film Festival winner is a total classic.

The film follows Garibaldi’s troops during the unification of Italy in the 1860s.

If you’re in the mood for a war film based in Italy, this is a superb choice.

Based on the E.M. Forrester novel, gives you an Academy Award winning romance in Florence.

The acting is fantastic,and the views of Florence will inspire you to book a trip by the end of the movie.

This is easily Federico Fellini’s most famous film thanks to the infamous fountain scene at the end.

If you haven’t watched this one yet, add it to your movie list ASAP!

Let me know in the comments below which movie about Italy you’re most looking forward to checking out! 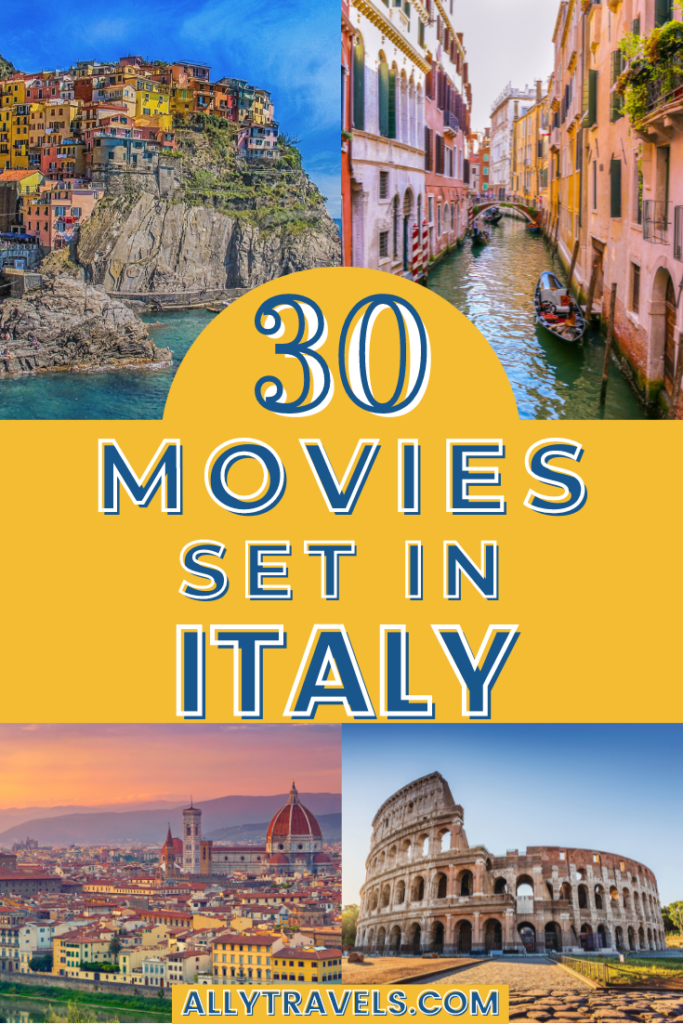