17 Best Things to Do in Greenwich Village: Ideas You’ll Love 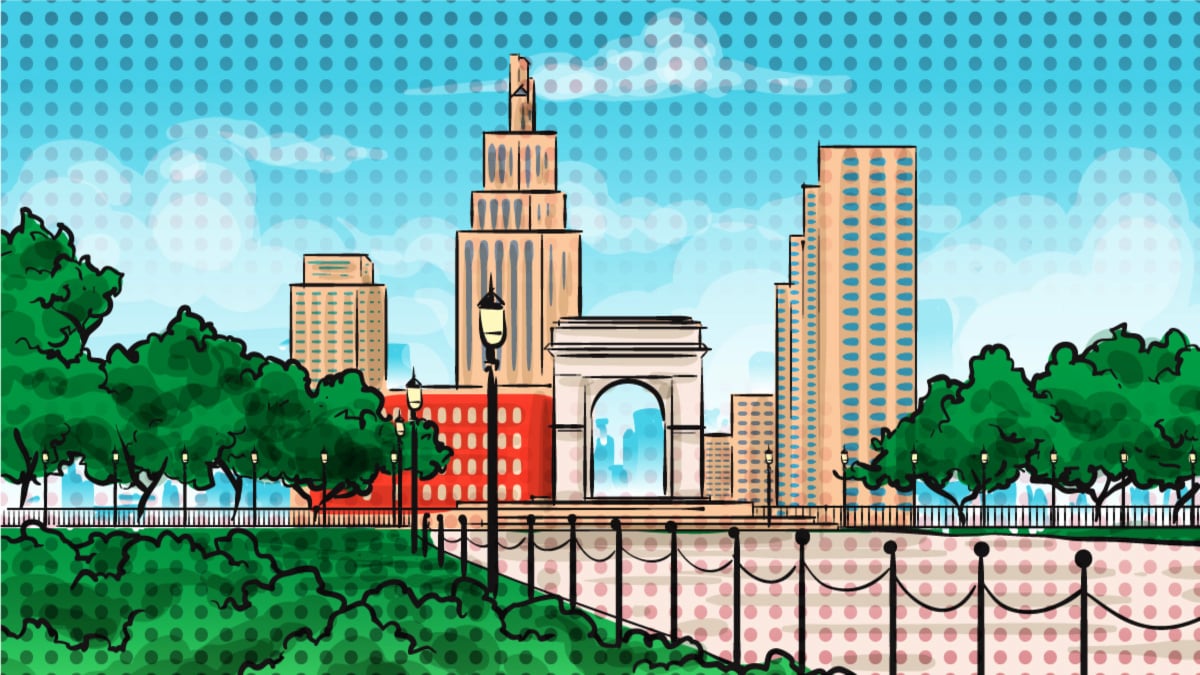 After living in NYC for over a decade, I’ve spent a ridiculous amount of time exploring Greenwich Village.

I’ve done everything from quiet afternoon strolls, to crazy private rooftop parties, to those obligatorily late night pizza or falafel runs after a late night out bar hopping with friends.

Greenwich Village really has something for everyone.

While you’re in the city, I highly suggest you get away from midtown and head downtown to the village for the day.

Seriously, what more could you want in a destination?

Below you’ll find all my favorite things to do in Greenwich Village as a local, plus some answers to frequently asked questions about the village.

Best Things to Do in Greenwich Village

When Devour Food Tours asked me to check out their brand new Greenwich Village Food Tour, I immediately said yes.

Besides being a major foodie, I was eager to see if I’d discover any new spots that I’d been missing out on all these years.

I ended up discovering a couple of Greenwich Village hidden gems during their tour, including a pasta place I’m dying to go back to!

Our guide, Cherie, was super knowledgeable and really made the experience a special one by including bits of NYC history within our food tour.

I can’t recommend this enough. Whether you’re local or just visiting, I can guarantee you’re going to have an amazing and mouth watering time! I was shocked by how many hidden gems I was introduced to while on Devour Tour's tour. I can't reccomend this enough for tourists and even locals!

2. Hang Out in Washington Square Park

Grab either a slice from Joe’s or a falafel sandwich from Mamoun’s, then walk to Washington Square Park to people watch and eat.

Trust me, it’s the best afternoon, especially if you bring a good book to enjoy while eating and people watching.

The park has a ton of history, including its iconic giant marble archway was placed there to celebrate the centennial of Washington being the first President of the United States.

The village has no shortage of bars, and between being a 20-something New Yorker and later working a restaurant job in the West Village, I’m pretty sure I’ve checked out most of them.

These are the spots you need to swing by on a night out:

4. Check Out the Stunning Architecture

Greenwich Village has some of the most beautiful old architecture in the city, so don’t forget to occasionally look up.

These are some of my favorite places to admire in the village:

Since the village is all-around stunning, there’s nothing better than a low key bike ride through the streets, especially during the spring and fall.

Grab a Citibike and get exploring—just watch out for cars!

I’ve spent so many nights wandering down Macdougal Street either looking for late night eats, or the next bar with my group of friends.

This street has the best of both.

Head to Mamoun’s for late night falafel sandwiches (cash only).

Then indulge in one more drink at Aire’s Champagne Parlor. It’s always my go-to when I want something chill.

7. Indulge in Some Dessert

There’s a ton of amazing dessert places in the village, and since I have a big sweet tooth, I’ve tried all of them.

These are the spots that I’ll swing by while I’m in the neighborhood:

Everyone should catch at least one comedy show while in NYC.

We have some of the most talented performers in the U.S.—which shouldn’t be totally surprising since New York is home to SNL.

One of the most famous comedy clubs is The Comedy Cellar in the village.

My first time seeing a show here, I saw an up-and-coming Amy Schumer!

You truly don’t know who’s going to be on stage next. There’s always surprise celebrity performances at this place.

If you’re looking for something to do at night in Greenwich Village, I highly urge you to hit up this spot.

9. Take a Stroll Down Bleecker Street

Bleecker Street is about a mile long foodie paradise.

If you’re hungry in the village, just take a wander down this street and you’ll find something delicious.

Some of my go-to restaurants are:

10. Listen to Some Music

Greenwich Village was a big creative neighborhood back in the day, and still has tons of music venues running.

If you’re in the mood for some tunes, head to one of these clubs:

If you’re not sure where to hit up, join this tour and hit up a few spots!

I love seeing indie films, but unfortunately it’s getting harder to find theaters that showcase them.

I love going to IFC in the village, because that’s all they show.

If you’re into independent films, I can’t suggest checking out this place enough.

It’s such a local gem!

Greenwich Village is easily one of the most beautiful neighborhoods in Manhattan.

If you’re a photographer, Instagrammer, or just really love wandering around stunning areas, head to the village.

You’ll be in heaven with all the cute streets, shops, and restaurants.

Not to mention all the amazing street fashion you’ll likely spot. Book a photo session using the code ALLYTRAVELS for $10 off any photo tour, photoshoot, or even City Hall wedding photography!

Book a Photo Session!
If you click this link and make a purchase, I earn a commission at no additional cost to you.

Admit it, even if you aren’t into cheesy tourist photos, you still want to at least glimpse the iconic Friends apartment.

Do a casual walk by. It’s fun just watching all the fans geek out over seeing the iconic building.

While you’re at it, you might as well cross seeing the most famous exterior from Sex and the City, Carrie Bradshaw’s apartment stoop.

Fair warning though, they roped the stoop off because the owners don’t want tourists on the apartment steps.

Good thing is there’s no restriction on taking a photo standing on the sidewalk in front of the apartment.

Are you a mega fan? Check out this popular Sex and the City tour!

Greenwich Village has a reputation for being one of the cooler neighborhoods in Manhattan, and the shopping definitely lives up to the hype.

Check out some of these spots while you’re exploring the village:

16. Get Tickets for an Off-Broadway Show

If you’ve never seen an Off-Broadway show, consider this the sign that you need to buy tickets.

These are some of my favorite downtown theaters to check out: Check out scoring deals on last-minute tickets for shows and events, including tickets to sold out shows!

Chilling at a cafe in the village with a book is always a good way to spend a lazy afternoon.

If you’re feeling like a relaxing day, head to one of these spots to hang out:

Is Greenwich Village worth visiting?

Absolutely, it’s one of my favorite neighborhoods! It’s got something for everyone, offering beautiful streets, tons of shops and cafes, plus lots of nightlife.

What is Greenwich Village known for?

Many people know this as the neighborhood that they set the popular TV show Friends.

Want to travel to NYC without leaving the comfort of your own home? Watch one of these TV shows based in New York for the ultimate escape from everyday life!

What are the best things to do in Greenwich Village at night?

Greenwich Village has plenty to do at night, including comedy shows, live music venues, and tons of restaurants and bars.

52 Exciting Things to Do in NYC at Night: The City Made for Night Owls

New York City comes alive as darkness descends and the lights flicker to life. Check out my go-to list of things to do in NYC at night.

I hope you’ve found the perfect activity on my list of things to do in Greenwich Village.

Writing it has certainly made me eager to be back in the city again after my time in Europe wraps up.

Let me know in the comments below if there’s something fun in the village you’ve discovered that should be on my list! 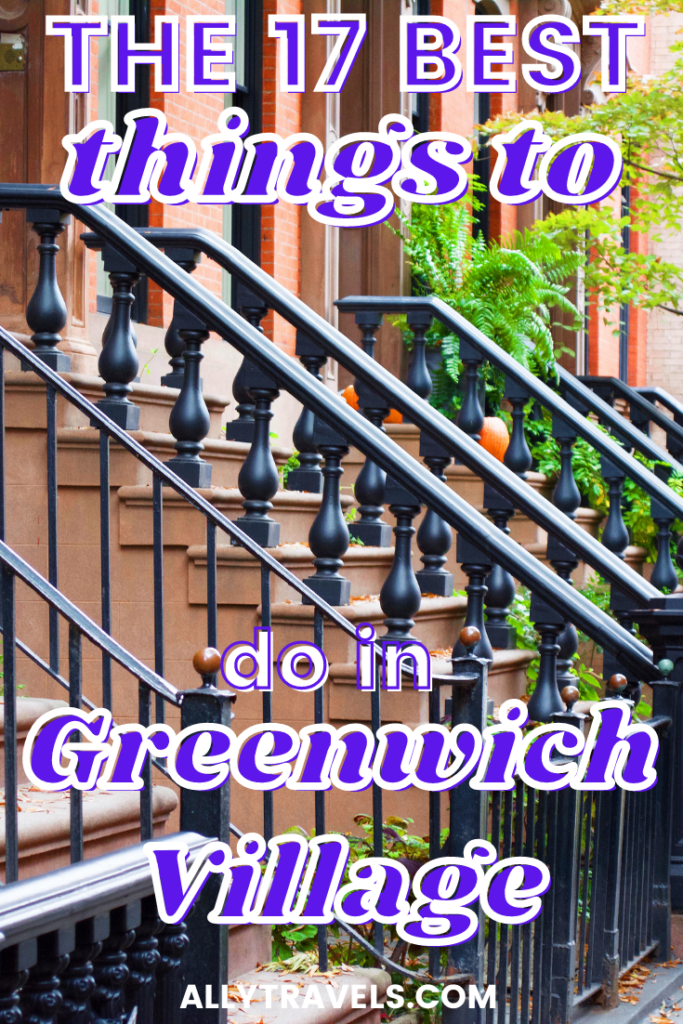